I noticed that internet sites were loading slowly or not at all on some systems that I had upgraded from Windows XP to clean installs of Windows 7. Pinging internet sites was fine, nslookup and dig queries all returned correct DNS resolution with no errors.

Sites such as google would load okay but larger sites like Amazon would load halfway or simply not load at all. Keep in mind these symptoms were seen on clean installs of Windows 7, and because of that malware causing these problems was thrown out of the equation.

As stated earlier all attempts to ping outside hosts worked perfectly fine. All DNS resolution was working beautifully so to dig a little further I fired up Wireshark and noticed the following: 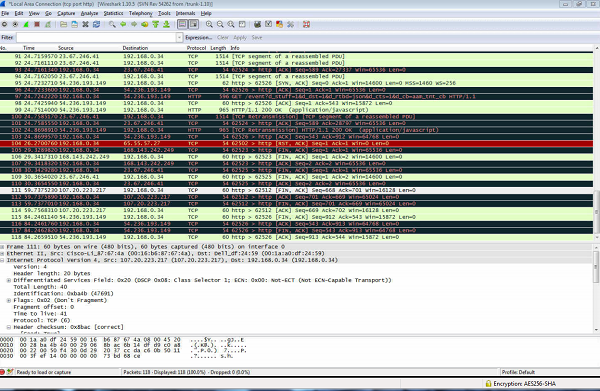 The NICs in these systems are Intel 82566DM-2 NICs. While looking over the capture I noticed quite a few of the following logged Header checksum: 0x0000 [incorrect .... After some digging I found this article: Auto Tuning - TCP/IP Receive Level

Basically to fix the issue you need to disable the Receive Window Auto-Tuning Level. To do that follow these steps:

Open a cmd shell with Administrator privileges and get the current tuning level:

This should result in the following output:

This seems to have fixed the problem and all sites now load correctly across all browsers. I did have an issue where I couldn’t set the Auto-Tuning Level and to fix that I had to issue the following command: