I have a CentOS box and a Windows XP box I wanted to be able to easily switch between. Instead of using a KVM switch I decided to use Synergy to switch between two monitors.

To setup Synergy I first installed it on CentOS from the EPEL repo:

For reference my systems are: xp=WindowsXP Box despina=CentOS Box (replace xp and despina with your system names) Once Synergy is installed you must configure it. First edit /etc/synergy.conf

This tells Synergy that to access my Windows XP system, move the mouse off the right side of the screen on my CentOS system.

To make Synergy start at bootup I added the following to my /etc/rc.local file:

This tells Synergy to connect to my Windows XP system at startup. I also wanted to have Synergy start at the very initial login page, to do that I had to do the following:

Edit /etc/gdm/Init/Default and add the following line at the very end but before exit 0 line:

Now add the following to the very top (after the #!/bin/sh line) of the /etc/gdm/PreSession/Default file:

Now to configure my Windows XP system. I simply downloaded and installed from http://synergy2.sourceforge.net/

Once it was installed I hit the Configure button and setup my screens as follows: 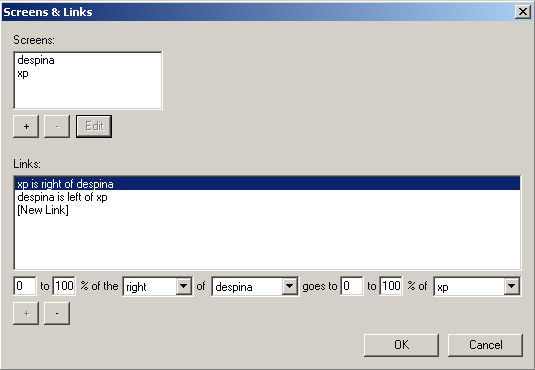 And that’s it. I can now move between systems simply by moving my mouse to the edge of the screen.