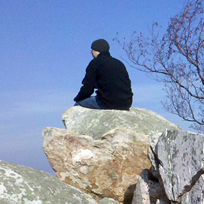 I’ve been professionally involved with Unix/Linux systems since the late 90’s. I started into this field learning about Computer Aided Design and studied quite a bit in college about 3D modeling and design using programs such as AutoCAD and 3DStudio Max. Though my focus shifted I still enjoy design.

My areas of expertise include:

In my spare time you can catch me actively scanning the skies for my Astrophotography projects.

Although it’s completely overkill for a site this small, I enjoy setting up sites for maximum stability and performance. Here is how computerglitch is served up.

First, all static content (besides the site itself) is served up using Amazons CloudFront CDN.

HAProxy is used to load balance between two micro ec2 instances. After the traffic passes through HAProxy, Varnish is used to cache the local static content.

Finally Apache serves up any leftovers of Octopress (beautiful blog software) not served from the CDN and not cached by Varnish. Technically because Octopress is purely static you could simply serve your entire instance from S3, which I considered doing. But because I tend to flip blog software constantly I chose this setup.

Computerglitch has served many purposes for me and will continue to do so. In its very early years I used it to learn about coding in Perl and PHP. I then started dabbling with using MySQL for the backend of all my pages. Over the years Computerglitch has been on FreeBSD, OpenBSD, Linux, and Windows.

As long as I’m researching new technology and finding innovative ways to solve complex problems using OpenSource, Computerglitch will stand by my side.